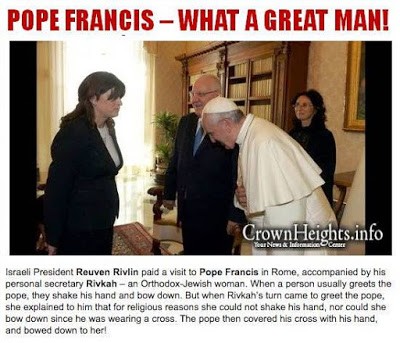 Pope Francis is also an Imam (religious guide) of this Muslim.  He is a true servant of God and a true follower of Jesus, and equally represents the ideals Prophet Muhammad stood for; Justice, equality and Kindness to fellow beings.

I have been looking for an individual who has genuinely understood the essence of religion and not hung up with rituals, though rituals are a part of everything we do. Mahatma Gandhi and Mother Teresa are the other two beings around my life time, although I was born four years after Gandhi's death, he has appeared twice in my dreams and has said that I have work to do. That keeps me motivated.

This man is one of the most inclusive humans God has created in this century; he respects God by respecting and including every human in his embrace. He has demonstrated respecting the otherness of others and accepting God given uniqueness to each one of his creation.

I have connected with him spiritually since May 2013, the day he was appointed to be the Pope. The more I read about him, the more I bond with him, and amazingly, what I had believe and articulated about him, he has done it all and more. It includes repairing the  Muslim-Christian, Jewish-Christian, and Hindu-Abrahimic relations, respecting those who do not believe in God, Gays and Lesbians, ordination of women into clergy... no human has to be treated anything less, all are equal in the eyes of God, and his eyes.

In the picture below, I am in tune with Rikvah, though she is an Orthodox Jew and I am a Moderate Muslim, we have the same attitude. We are all humans and are on par with each other.  I love this man Pope Francis for his humility, a symbol of true religious person. When Rikvah could not bow towards him for her own reasons, he turned around and bowed instead, to let Rikvah, me and the world to learn that the human being is more important than the religious symbols or the protocol of the Pope. Thank you for doing this Pope Francis.

He is a symbol of humility, what a great man he is and that is why I accept him as my religious leader.   Showing respect does not have to be communicated through bowing, it is expressed by merely admiring the man as Rikvah did without bowing. I am sure some of you may feel the same while others may opt for the other expressions. All paths are valid.

His teachings are Christian, because he is, but in reality he teaches the essence of religion that is embedded in "all" religions.  I hear him out as if a great Muslim Imam is speaking to me in a different wrapper.  He embodies what a true Muslim, may be a Jew or a Hindu, Sikh, or a Baha’i ought to be.

I will listen to him and will follow him. Yet, he is a Christian and I am a Muslim. The essence of all religions is to make you a human who has no barrier between him and the other human. I am willing to say, if the religion does not remove hate, prejudice, ill-will and walls between you and the other, then you really did not get your own religion. You may go back to your religion until you find yourselves to be boundless.
Genuine spirituality is feeling like a cog in the wheel of the universe and an element in the millions of other elements.  I am merely a strand in the World Wide Web, as Chief Seattle would have said it.

Pope Francis will be here in the US in two weeks, I have seriously debated about seeing him in person, as it is my sincere heartfelt desire to meet him and feel blessed with his holy presence. I have never felt like this with any one in my life.  The other side of me resists seeing him, why does it have to be symbolic?

I feel buyoed to write about him, and have written over 20 articles, some of them are at:http://mikeghouse.net/PopeFrancis.asp

Mike is a speaker, thinker, writer, pluralist, human rights activist and a media commentator committed to building cohesive societies and offers pluralistic solutions on issues of the day. His info is in 63 links at MikeGhouse.net and TheGhouseDiary.com  chronicles his writings. 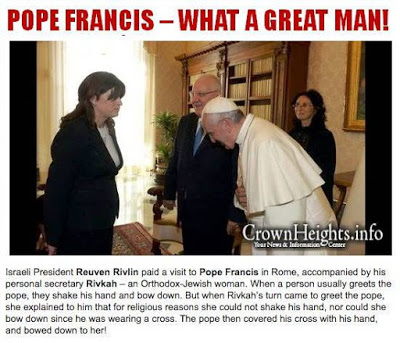